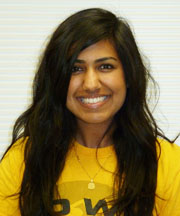 Obesity is a growing worldwide epidemic, with the number of obese adults reaching over 500 million worldwide in 2008. In the United States alone, more than 30 percent of adults are obese and 17 percent of children and adolescents are obese. It has been shown that obesity is associated with increased susceptibility to infection. The mechanisms responsible for increased risk of infection and impaired immune responses in obese individuals remain to be determined.

My research in the Badovinac Lab aims to understand how obesity impacts T cell responses following viral and bacterial infections using a murine model of diet-induced obesity. We know that CD8+ T cells are a specialized subset of T cells that play a vital role during an elicited immune response to control infections. We also know that memory CD8+ T cells provide enhanced protection following pathogen re-encounter. We aim to understand how primary CD8+ T cell responses are altered following infection in an obese environment and how this may impact the generation of memory CD8+ T cells. Additionally, we want to characterize the physiological changes induced by obesity, by determining the level of inflammation in obese and lean animals, in steady state and infectious settings. The goal of these studies is to gain insight on the effect of obesity on immune responses by utilizing models of bacterial and viral infections.

In addition to being a graduate student researcher, I am an avid “foodie” who loves to explore new restaurants, try out baking and cooking recipes, and follow chefs on the Food Network.