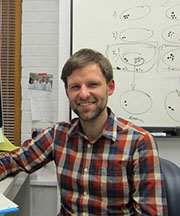 Chronically critically ill (CCI) patients often exhibit features of immune suppression in the aftermath of sepsis. The T-lymphocyte system, in particular, is generally considered to be severely paralyzed and thus compromised in its ability to fight infections at post-acute stages of sepsis. However, how precisely an episode of systemic inflammation (SIRS)/sepsis impacts and affects the various T-cell compartments is far from being understood. In particular, it is not known whether systemic inflammation affects all T-lymphocytes “systemically”, causing a widespread compromised performance on a per-cell-basis, or rather impacts on the T-lymphocyte repertoire in a clonal or stochastic fashion.

My present project at the Center for Sepsis Control and Care in Jena, Germany aims to characterize the functional performance of T-lymphocytes and molecular mechanisms responsible for any detected abnormalities in T-cells at late, post-acute stages of sepsis. In particular, we want to decipher the contribution of the systemic, aberrant burst-like acute cytokine release (cytokine storm) to those abnormalities and we want to understand whether or not a systemic inflammation does translate in systemic damage to the T-cell compartment.

In the context of my project in Germany, we established an international collaboration with the research group of V. Badovinac at the Carver College of Medicine at the University of Iowa. To improve my experimental skills and my knowledge in immunology I joined the group of V. Badovinac for a 3.5-month research stay.

In addition to my life as a scientist, I love long-distance running, reading and playing guitar.